“The Gag and Heave”,

The White House Restaurants in South Bend were a local chain of 24-hour diners in the area. The most famous was the one across from John Adams High School.  The Diner had several nicknames, such as “Fat Shirley’s”, and the most memorable, “The Gag and Heave”.  The owner, Burke Hammond established the restaurant in 1955.  They even had bumper stickers that advertised the diner as the “Gag & Heave”.  The High School students loved it.  On the other side of town, the Studebaker workers also called their local White House Restaurant, “The Gag & Heave”.  Since I went to John Adams High School, I just had to paint the building with the 1962 Studebaker Lark Police car sitting outside, ready for action, just as it was frequently seen during those late-night hours.

The G & H, was eventually sold and is now “Jeanie’s” and has been remodeled and still sits at the corner of Mishawaka Avenue and Twyckenham Avenue, in South Bend across from the High School at 1444 Mishawaka Avenue, serving those late night burgers and lots of coffee.

The White Castle Restaurants started in 1927, as the first one opened in Cincinnati, Ohio.  The first White Castle in Chicago was located at Wabash and Cermak, in 1930. The restaurant chain offered small hamburgers that sold for 5 cents until the 1940s.  The American term for a small sandwich 3 inches across or smaller was called a “Slider”, which became a common term for a White Castle Burger.

The painting was done in my early years, when I started exhibiting at the Chicago area shows.  It was a popular item, especially in the Midwest area.  It was also included in my set of 4 Chicago prints, along with Billy Goat Tavern, Superdawg and Hot Diggity Dogs, which were horizontal paintings. I added the Chicago Cubs panting later, but it was a vertical painting. 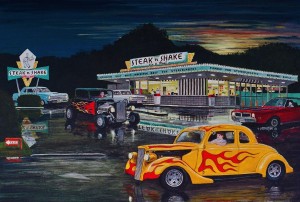 While exhibiting in the area of St. Louis, I decided to see what they had in their area that was nostalgic. After some discussion with area locals, we found that the oldest Steak and Shake still in existence, was just off of Hwy 55, in St. Louis.  Of course I had to check it out, along with some other possible places.

The Steak and Shake painting drew attention wherever I went.  I put the cars into the painting to add to the time period of the building. Many people bought prints, some of the building and others for the classic cars.

I managed to do some of my painting at the shows, but customers kept me busy with questions. I liked the questions. The painting just drew the attention. 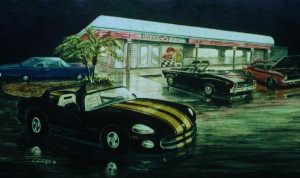 While we were in Sarasota, Florida, we visited my cousin for few days.  Since he is a car collector and exhibits his cars at the car shows in Florida, he was impressed with my Diner paintings.  There was a local diner in Sarasota, called the 50s Diner and he asked if I would paint it with a couple of his cars in the painting. All four of the cars shown belonged to him at the time.

This painting added to the classic car inventory of the available prints.

While exhibiting in a show in Roanoke, Virginia, we found this unique weiner stand. Come to find out, it is Roanoke’s oldest restaurant and one of the most popular.  It opened in 1916.  Since I painted this picture, which was at 110 Market Square, across from the City Market, they have moved into the Market at 1 Market Square and opened another at 3601 Brandon.  They’re known for their grilled hot dogs and chili dogs.

The prints of the painting were very popular, along with the set of four places in Roanoke. (Texas Tavern, Roanoke Weiner Stand, Billy’s Ritz and Agnew Seed Store)

I love Roanoke and could live there! It is such a cool town.  Here are a few of my favorite places around town…

Billy’s on the Ritz

One of the stops on my Arts and Festival Tour was Roanoke, Virginia. They knew how to put on a festival, complete with great entertainment. Since the festival was just blocks away from the Texas Tavern, which we had heard about, we just had to check it out.

The nostalgia of it all was more than I could hope for.  The diner was established in 1930.  They claim that it seats 10,000 people (10 at a time).  Famous for their Chili, Hot Dogs, Hamburgers and Cheesy Westerns. I noticed, while sitting at the counter, even the metal pipe that you rest your feet on, had been completely worn through to the middle.

By the readers of the Roanoke Magazine, Texas Tavern was voted the best for: Chili, Hot Dogs, Local Hamburger and Late-Night Diner.  If you’re ever in Roanoke, stop downtown at 114 Church Ave.  They are open 24 hours, 7 days a week. You will be glad you did!

Other Roanoke, Virginia places I have painted are:  The Roanoke Weiner Stand;  Agnew Seed Store and Billy’s Ritz.

I love Roanoke and could live there! It is such a cool town.  Here are a few of my favorite places around town…

Billy’s on the Ritz

In 1938 Bonnie Doon Ice Cream was established and eventually grew into a local chain of drive-in Ice Cream shops and restaurants. The first business was located on 4th Street, in Mishawaka, Indiana.

I had painted one of the other Bonnie Doon drive-ins, located on S. Michigan St, in South Bend, IN and the painting was on display at  local Art show, when a couple approached me to paint the 4th Street Ice Cream Shop.  They used to date when they were young and that was their favorite date place.  I painted the building as it looked at that time, putting their Studebaker in the painting.

The building was also the factory for making the ice cream for the other stores.  It now sits empty, as the store closed a couple of years ago.  Only one store remains, which was purchased several years ago.  Bonnie Doon eventually entered the local retail market with a variety of flavors.

This location was on Lincolnway, in Mishawaka.  It is the only location still operating but has a different owner, but Bonnie Doon ice cream is still popular.  The ice cream plant was originally within the 4th Street building and later located in Elkhart and could be purchased at retail outlets in the area.

The panting highlights the neon with the 1956 T-Bird, showing the era of the business.  On the opposite side of the building, there was a drive-up with car hops and the traditional ordering through a speaker from your car. I even included my wife Evelyn in the painting inside, complete with the Juke Box. She is not the one with the baseball cap! 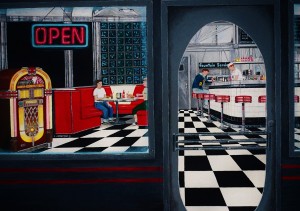 This painting is my version of a silver diner, looking in from the outside, complete with the soda fountain, black and white checkered floor a booth, bar stools and yes, a jukebox, It was a fun project to make up my own Silver Diner.  I sold this painting, but not without conditions. Check out those conditions in my second painting  (here). 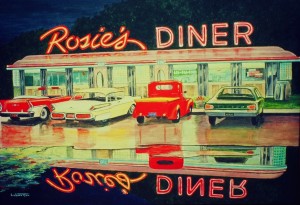 Most everyone has seen photos of Rosie’s Diner, some with miniature lights for tail lights and in strategic areas of the photo that you could hang in your recreation room, or maybe the kitchen. The painting above, is also of Rosie’s Diner. Let me tell you the story of how this painting started.

While participating in the #1 Art Show, at the time, in the country, which was Coconut Grove, Florida, I met a ceramic artist who made miniature diners that had neon on them.  It was great work.  The artist, Jerry Berta, told me a story that fascinated me.  I had seen those photos in stores and restaurants, I mentioned above.

Jerry had a REAL diner, that he used as a studio to make his miniature diners. People would show up at his door, wanting to buy diner food, and he had to explain to them, it was only his studio.  Then he had the opportunity to purchase a diner in Little Ferry, New Jersey.  They were going to get rid of the diner to make room for what they called “Progress” and offered Jerry a deal, he couldn’t refuse.

The Silver Dollar Diner, was the name of the Diner, where the well-known commercial with Rosie, the waitress, advertised paper towels. Jerry accepted the deal and moved it to Michigan. He said he only had 10 flat tires during the move. When he arrived in Rockford, he renamed the Diner, ‘Rosie’s.  It was located in the same parking lot as his other diner and sold regular Diner Food.

On various nights of the month, he would turn on the neon lights and allow people to photograph their classic cars in the watered-down parking lot, which shows the reflections of the neon.

While in Greenville, Michigan at an Art Festival, I took time to stop there and photograph the diner.  The painting above is from the photos I took that day.

Other Silver Diner Paintings I have done are: