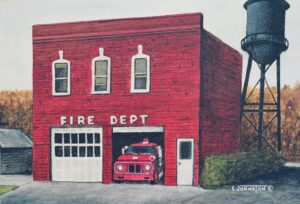 I have painted several fire related paintings, which make up my fireman set.  In choosing a fire station, my first choice was my most familiar. I grew up in Cassopolis, Michigan until was 10 years old.  Living in an upstairs apartment less than one block from the volunteer fire department, I became familiar to the sound of the siren that alerts everyone when they are needed.  It was not much of a fancy fire station, but it was ours.  As a young boy, I was always fascinated by the water tower that sat behind the station. This painting was one of my early paintings, so you can see the difference in my artistic talents from then.

As part of the Fireman’s set, it became a big seller all over the country.  Other paintings included: The Fire Dog;   Fire Truck;   Miami fire station and the Fire Hose Reel.