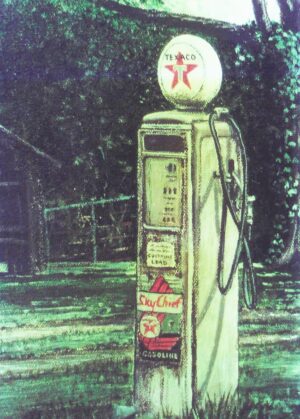 In 1986, during one of my Art Festivals, I had exhibited some of my past work in a photograph book, which included some commission work that I had done.  Billy Neal, a local resident, owned a gas station in Cartersville, GA.  His wife saw a painting of a Texaco gas pump hanging in my booth and purchased it for her husband as a gift.

Since she had seen some of my local paintings that I had done for other people in my book, asked if I would paint a picture of Billy’s Texaco station in Cartersville, GA.,  I was delighted to be able to add another local painting to my photograph book, which led to other commissioned paintings.