During my years on the road exhibiting at Art Shows and Festivals, Crown Point, Indiana was a regular on my tour, as it was held on the Court House lawn in the center of town.

The library, built in 1908 was located at 223 S. Main Street, just one block from the center of the town, from the Court house. With the expansion of the library, it now extends all the way to Court Street.  The original part of the building is now being used as office space for the Crown Point Community Library.

The Carnegie Library was one of four paintings from Crown Point, that I painted.  The others were the Lake County Court House;  the Criminal Justice Building and the former Lake County Jail.

Made famous by John Dillinger.

While exhibiting at a number of art festivals on the Court house lawn in Crown Point, Indiana, I found that one of the local landmarks, was the old jail across the street.  I eventually created a painting of the jail, one of four from Crown Point.

John Dillinger, during a bank robbery in Chicago shot and killed a police officer and was captured in Tucson, Arizona and taken to the Lake County Jail, in Crown Point, Indiana.  Early morning, on March 3, 1934, Dillinger had carved a gun either from a bar of soap, or a wooden washboard, (Local legend varies), covering it with black shoe polish.  Using it in his escape, an automatic gun was taken from a jail guard, as he made his escape.

On July 23, 1934, Dillinger was shot and killed by the FBI outside the Biograph Theater, in Chicago.

The painting became quite a conversation piece.

Among many of the art shows and festival I attended since 1978, one of many local shows took place on the lawn of the Lake County Courthouse in Crown Point, Indiana. Since I attended the show for several years, I painted several local places.  Of course, the first painting had to be the Courthouse.

The Courthouse was unique, with 3 towers, the middle being the clock tower. Built in 1878, it was referred to as “The Grand Old Lady”.  It was a combination of Romanesque and Georgian architectural styles.

Now, retired from County Government, the building now houses the Historical Museum along with shops that attract tourists, shoppers and other visitors.

Other Crown Point paintings are: Carnegie Library, Criminal Justice Building and the Lake County Jail, made famous by John Dillinger. 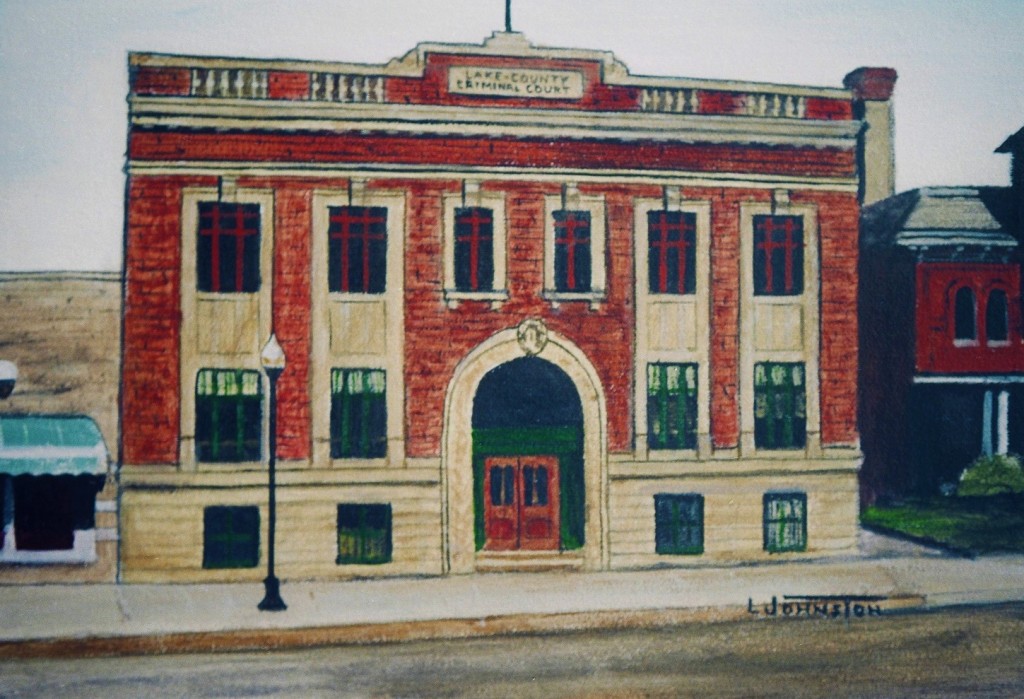